Euro 2020: England fans couldn’t get away from the stadium quickly enough. Scotland’s fans stayed to sing

The difference at the end was how the two sets of supporters left the stadium. England couldn’t get away quick enough, while Scotland stayed to sing.

The pandemic may have changed much about football, but the rivalry in this, the oldest international fixture in world football, remains undimmed. It was first played in 1872 and just like then, this latest clash ended 0-0.

And how the Scots sang! Around the stadium for hours before kick-off, England supporters had belted out chorus after chorus of “Scotland get battered everywhere they go”.

But at the final whistle, it was the Tartan Army rejoicing by sarcastically singing the same song.

Crowds of supporters gathered in Leicester Square in central London after the scoreless draw. Red flares were set off as fans, many wearing kilts and draped in Scotland flags sang and cheered in the popular tourist spot.

The best chances of the match had fallen to Scotland, but they failed to convert them. They now know that to progress in this tournament they need to beat Croatia on Tuesday night. After this performance, they’ll be filled with belief that they can.

England now know that they simply must beat the Czech Republic to top the group, a draw won’t be enough. And after this fruitless 90 minutes on their home turf, the pressure is very much on Gareth Southgate’s team.

If this game was anything to go by, Tuesday promises to be a nervy, adrenaline-packed night for both England and Scotland. England fans will hope their team find some creative spark from somewhere, anywhere.

However, some England fans were still able to look at the positive.

Mark Cumberworth, 58, and from Essex, said after the match: “I’m absolutely soaked but it’s been good fun.”

On the result, he said: “I’m disappointed, it’s almost like we’ve settled for a draw, which isn’t the worst result in the world.

“Scotland have played well. England have no chance (of winning the Euros) playing like this.”

One Scotland fan said to me outside Wembley stadium after the game: “Brilliant, fantastic. Masterclass, an absolute masterclass from (the manager) Steve Clarke.”

Another Scotland supporter said: “I’m happy we’ve got a point, it rolls on to Tuesday night and then or the first time in a lifetime we’re going to qualify for a major championship.”

A third Scot said: “We were the better team and deserved the win. It was a good point though. a point gives us a chance to get through, if we win on Tuesday we will go through.” 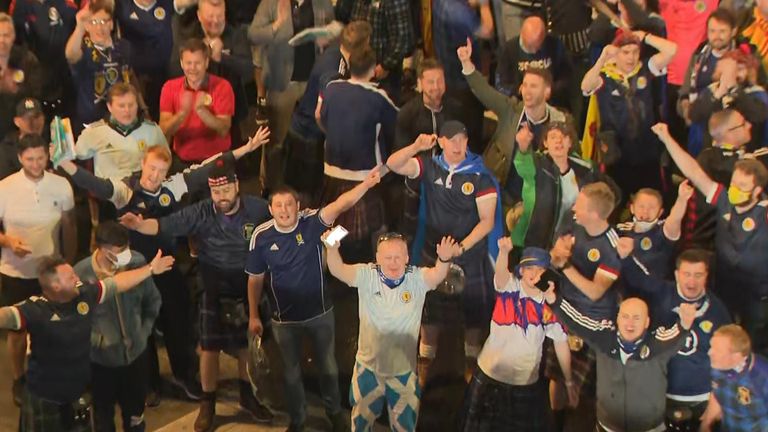 Malcolm Gillespie, from Falkirk but living in London, said the draw was an “amazing” result for Scotland and praised the setup at the central London designated key worker area.

The 41-year-old, who attended with his son Santiago, eight, said: “I’m happy but I definitely think we could have edged a win. They’ve played really well.

“I spoke to some English fans who were really friendly. We’ve loved every minute of it.”

On the weather, he said: “It’s OK, we came prepared, we’re Scottish.”

Tags:
couldnt, england, Euro, fans, quickly, Scotlands, sing, stadium, stayed
Newer Message in a bottle from 2018 found by teen after travelling 2,000 miles
Back to list
Older UK weather: Flood warnings for the weekend after parts of South East see month’s worth of rain in one day

Adele says she is overwhelmed by the support she received from fans after being forced to postpone the start of her La...

END_OF_DOCUMENT_TOKEN_TO_BE_REPLACED

No further action will be taken over a banner unveiled by Crystal Palace fans protesting the takeover of Newcastle Uni...

END_OF_DOCUMENT_TOKEN_TO_BE_REPLACED

Ajax supporters let off pre-match fireworks before their 4-0 demolition of Borussia Dortmund, covering the Johan Cr...

END_OF_DOCUMENT_TOKEN_TO_BE_REPLACED

Well, what a weekend that was in the Premier League… again! There are now THREE giants tied at the top of the table after...

END_OF_DOCUMENT_TOKEN_TO_BE_REPLACED

FANS of Brighton and Hove Albion are highest up the exam table as they have got most GCSEs, research found. After Brighton, Premier ...

END_OF_DOCUMENT_TOKEN_TO_BE_REPLACED

A cat has been saved by fans at an American football game in Miami after it plunged about 30ft from an upper deck of t...

END_OF_DOCUMENT_TOKEN_TO_BE_REPLACED

Badger cull: Thousands to be put down in seven new areas across England as government battles bovine TB

Badger culling will be extended to seven new areas in England this year in a b...

END_OF_DOCUMENT_TOKEN_TO_BE_REPLACED

Cristiano Ronaldo is gearing up for his return to the Manchester United team. The 36-year-old icon reported for ...

END_OF_DOCUMENT_TOKEN_TO_BE_REPLACED

The international break is upon us and yet all eyes are still on Manchester United after the return of Cristiano Ronaldo....

END_OF_DOCUMENT_TOKEN_TO_BE_REPLACED

Hungary v England LIVE: Grealish starts while Bamford and Saka on the bench

England take on Hungary in their first international fixture since the Euro 2020 final in Budapest tonight. Gar...

END_OF_DOCUMENT_TOKEN_TO_BE_REPLACED

Football fans in England are set to be allowed to stand at games before the en...

END_OF_DOCUMENT_TOKEN_TO_BE_REPLACED

Afghanistan: Tony Blair says US and UK troops should have stayed put ‘to see it through’ as withdrawal could lead to UK ‘security threat’

US and UK troops should have stayed in Afghanistan "to see it through", Tony B...