The West “blinked” and did not understand troops needed to be on the ground in Ukraine earlier this year and sanctions will only push Russia towards China, the chair of the defence committee has told Sky News.

Tobias Ellwood, in Kyiv, told Kay Burley: “It would have taken five days to mobilise those forces, at the request of Ukraine, this is what they actually wanted but we blinked, we didn’t appreciate the full picture.

“We didn’t have the situational awareness to say ‘my goodness, this is not just about Ukraine there’s something else going on here’.

“The West is now appreciating that, there’s no doubt about that.

“But, I worry that still isn’t fully understood. Any sanctions that are imposed onto Russia, they will retaliate and it will give Putin the excuse to pivot his country away from the West towards an alliance with China.” 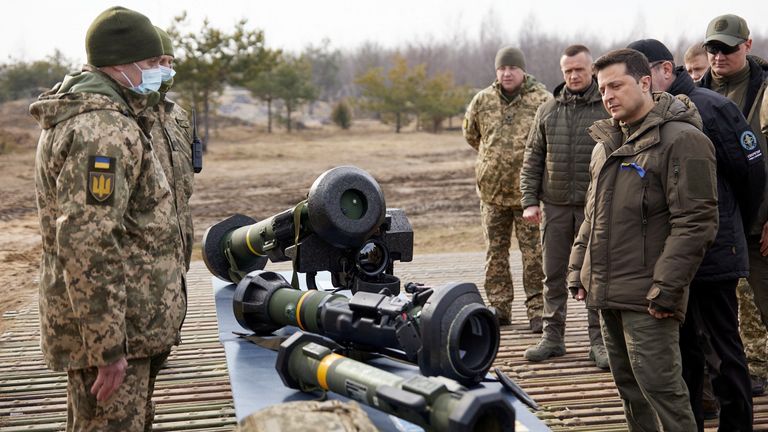 The former army captain and defence minister added that Moscow turning to Beijing could have “massive implications for geo-security over the next few decades”.

Russia has said units are moving back to their bases but the armed forces minister, James Heappey, told Sky News that is “disinformation” and over the last 48 hours more troops have been moving towards the border.

Asked if Russia is closer or further from invading Ukraine than Monday, Mr Heappey said: “My view is we’re closer.

“If we’re wrong, brilliant – tens of thousands won’t die but unfortunately what we’re seeing, it’s hard not to be sombre.”

Mr Ellwood added that he started calling for the UK and the rest of NATO to take action at the end of last year and said the consequences of allowing Russia to invade would have “massive consequences” for the British economy, including food and gas prices.

The Conservative defence committee chair also said Russia could still invade Ukraine “at any moment”, despite Moscow saying it is pulling troops back to their bases following training exercises.

But, he said it is “far too late” to bring in a NATO division and instead the alliance should look at other measures to prevent a Russian invasion.

Mr Ellwood added: “Privately, I think the international community is regretting not stepping forward but we still can act, we still can offer a no-fly zone.

“And critically, this initiative Britain put forward, this alliance between Poland, Ukraine and Britain is something that’s very very important indeed – that needs to be explored as to how we can support the Ukrainian people.

“If we do nothing and allow an invasion to take place, it will have a totemic effect on European security.

“This is a serious moment and we’re being tested.”

END_OF_DOCUMENT_TOKEN_TO_BE_REPLACED

Indonesia earthquake: Many school children among 252 killed in West Java

Many children killed when their schools collapsed are among the 252 dead following an earthquake that devastated a tow...

END_OF_DOCUMENT_TOKEN_TO_BE_REPLACED

The former children's commissioner for England has warned of families across the country facing "awful conditions" in ...

END_OF_DOCUMENT_TOKEN_TO_BE_REPLACED

More than a billion teens and young people risk hearing loss due to use of headphones, earbuds, and concert attendance, research warns

More than a billion teenagers and young people could be at risk of hearing loss due to their use of headphones, earbud...

END_OF_DOCUMENT_TOKEN_TO_BE_REPLACED

Elon Musk has banned remote working at Twitter, warning staff of "difficult times" ahead, just days after sacking half...

END_OF_DOCUMENT_TOKEN_TO_BE_REPLACED

The UN's climate change chief has told Sky News there has never been such a "tense" and "divisive" geopolitical enviro...

END_OF_DOCUMENT_TOKEN_TO_BE_REPLACED

Even before the German chancellor's plane took off, the timing of this trip to China had become a topic for debate and...

END_OF_DOCUMENT_TOKEN_TO_BE_REPLACED

Gamers are cutting back on new purchases and playing later at night to avoid peak electricity costs amid the cost of l...

END_OF_DOCUMENT_TOKEN_TO_BE_REPLACED

Kanye West paid a settlement to a former employee who alleged he had used antisemitic language in the workplace, accor...

END_OF_DOCUMENT_TOKEN_TO_BE_REPLACED

Analysis: Biden's intervention is high risk - and controversialThis was no normal pre-elect...