Sir Keir Starmer has urged anti-monarchy protesters to “respect” people mourning the Queen and not “ruin” their experience.

The Labour leader spoke out amid controversy over a small number of protesters being arrested during royal ceremonies.

Sir Keir said protest was a “great British tradition” but that hundreds of thousands of people wanted to have a “moment” with the Queen.

Asked about the police response to those wishing to protest, Sir Keir told BBC Breakfast: “The word I’d use around that issue is ‘respect’.

“I think if people have spent a long time waiting to come forward to have that moment as the coffin goes past or whatever it may be, I think respect that, because people have made a huge effort to come and have that private moment to say thank you to Queen Elizabeth II.”

Sir Keir added that “obviously we have to respect the fact that some people disagree”.

“One of the great British traditions is the ability to protest and to disagree, but I think if it can be done in the spirit of respect,” he said.

“Respect the fact that hundreds of thousands of people do want to come forward and have that moment, don’t ruin it for them.”

The plea for respect comes after senior Tory MP David Davis wrote to the chief constable of Police Scotland to express his concern over the arrest of anti-monarchy activists.

“At a time of national mourning, we should all ensure that we behave respectfully. But we must not sacrifice the principle of free speech upon which modern Britain is built,” he tweeted.

“I am a staunch monarchist, but republicans have as much right to voice their opinions as anyone else.”

Police Scotland have charged two people in connection with allegedly breaching the peace after two separate incidents earlier in the week.

Read more:
Could an anti-monarchy placard get you arrested?
Man arrested after heckling Prince Andrew

A protester bearing a handmade sign saying “not my King” was also spoken to by police and escorted away from the Palace of Westminster in London.

On Tuesday, Scotland Yard was prompted to issue a statement saying the public “absolutely have a right to protest” after a barrister holding a blank sign tweeted footage of himself being threatened with arrest in Parliament Square.

Civil liberty groups and a number of MPs have expressed alarm at the actions of the police.

However, former home secretary Jack Straw said that anti-monarchy protests should not be held before the Queen’s funeral to prevent “public order problems”. 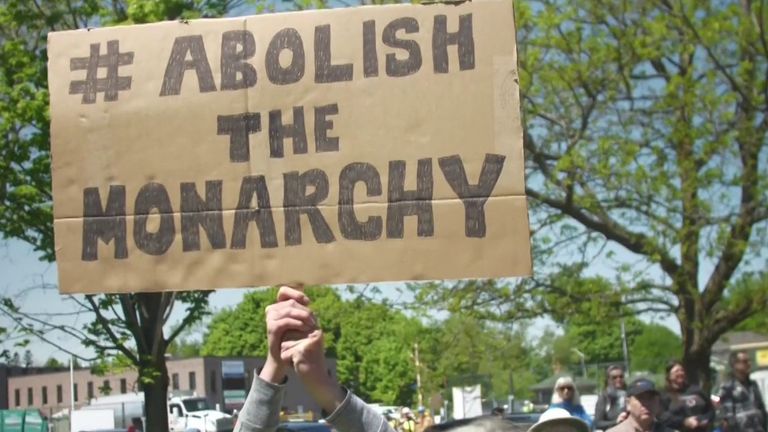 Alongside the protests, hundreds of thousands of people are expected to wait in lengthy queues to see the Queen lying in state in Westminster Hall from this evening until her funeral on Monday.

The King and his sons will walk behind the late monarch’s coffin as she leaves Buckingham Palace for the final time.

Sir Keir revealed this morning that he would be part of the reception gathering when the Queen’s coffin arrives in Westminster Hall, and that he would also return later to pay his respects privately, accompanied by his wife and children.

Eyewitness: 'This is like an A-bomb hit the place'The barrier islands off the coast of sout...

END_OF_DOCUMENT_TOKEN_TO_BE_REPLACED

Trevor Noah is quitting as the host of The Daily Show, saying his "time is up" after seven years on the late-night tal...

END_OF_DOCUMENT_TOKEN_TO_BE_REPLACED

Outside the Labour conference hall in Liverpool, the winds were up and the rain pouring down. Back in the City of Lond...

END_OF_DOCUMENT_TOKEN_TO_BE_REPLACED

The Royal Navy's flagship HMS Queen Elizabeth has arrived in New York for its deployment to the United States to host ...

END_OF_DOCUMENT_TOKEN_TO_BE_REPLACED

A union boss has said Sir Keir Starmer must "cosy up to working class people" to be effective in Opposition against th...

END_OF_DOCUMENT_TOKEN_TO_BE_REPLACED

The Queen’s funeral watched by average of 26.2 million people in UK

The Queen's funeral was watched by an average of 26.2 million people across all channels, according to the Broadcaster...

END_OF_DOCUMENT_TOKEN_TO_BE_REPLACED

The Phantom of the Opera - Broadway's longest-running show in history - is scheduled to close its doors after 35 years...

END_OF_DOCUMENT_TOKEN_TO_BE_REPLACED

A sombre and solitary silhouette in black opened Paul Costelloe's Spring/Summer '23 catwalk show, one of many designer...

END_OF_DOCUMENT_TOKEN_TO_BE_REPLACED

An investigation into whether Sir Keir Starmer broke COVID rules cost Durham Police over £100,000, a Freedom of Inform...

END_OF_DOCUMENT_TOKEN_TO_BE_REPLACED

Neymar has accused a Champions League referee of ‘lacking respect’ after getting booked for his trademark celebration duri...

END_OF_DOCUMENT_TOKEN_TO_BE_REPLACED

‘A treasure forever and ever’: 100-year-old is one of last to get birthday telegram from Queen

Celebrating her 100th birthday surrounded by her family today, Eileen Shearburn held the telegram from the Queen she r...